Nuxeo Drive is a desktop client that enables bidirectional synchronization between the local desktop and a Nuxeo content repository.

This page aims to describe the main technical concepts used in Nuxeo Drive, on both the client and server side.

Please make sure you have read the Nuxeo Drive User Documentation before reading this page. If you are interested in building and developing on Nuxeo Drive, please take a look at the contributor guide.

Note that this description of the technical details and internals of Nuxeo Drive should not be viewed as a commitment that they are a stable and definitive API. The details of the APIs, Operations, and the local storage in particular, are subject to change in order to improve the user experience.

The Nuxeo Drive client is a full Python application. It is distributed as a complete package embedding all required software and libraries to run under Windows 32 and 64 bits (.msi) and Mac OS (.dmg). This includes Python itself and a set of Python third party libraries listed in the requirements.txt file.

You can fetch the latest release of the Nuxeo Drive client for Windows and Mac OS (also available from your Nuxeo Platform Home > Nuxeo Drive tab).

Drive local storage relies on SQLAlchemy, the Python SQL toolkit and Object Relational Mapper. The database file nxdrive.db is located in the .nuxeo-drive folder located in the user home directory.

The data model is described below.

Nuxeo Drive embeds the Alembic tool to handle migration of the data model in case it changes from one version to another, for more details see related documentation.

The possible values for pair_state resulting of the different combinations of local_state and remote_state are summed up in this table.

This is the key of the Synchronization process as it relies on the pair_state to decide which action is needed in order to synchronize a local file or folder with the associated remote document and vice versa.

For each server binding (connection between Nuxeo Drive and a Nuxeo server) Nuxeo Drive needs to provide some credentials to get authenticated against the Nuxeo repository. There are two modes of authentication.

Is only possible if the nuxeo-platform-login-token addon is deployed on the Nuxeo server. When asking for a server binding, either through the authentication pop-up or the command line, the user needs to provide its username and password for Nuxeo Drive to make a request to the TokenAuthenticationServlet in order to acquire a token. This token is a UUID stored in a server-side SQL directory and allows a user to get authenticated through the TokenAuthenticator by passing the token in the X-Authentication-Token request header. This authentication plugin is configured to be used with the Trusting_LM LoginModule which implies that no password check is done, a Principal is created from the username associated with the token if the user exists in the user directory. The token is stored by Nuxeo Drive in server_bindings.remote_token and reused for each HTTP request. This has the benefit of not having to store the user's password on the local desktop.

At any time a user can revoke a token for a given device from the Nuxeo Drive tab in the User Center. In this case Nuxeo Drive isn't able to authenticate against the Nuxeo server, switches to offline mode and deletes the token from the local storage. The "Update credentials" entry from the Nuxeo Drive menu is then displayed as "required", allowing the user to acquire a new token by providing valid credentials.

Note that this addon is not specific to Nuxeo Drive and can be used by any third party application to authenticate to a Nuxeo repository. Technically, to acquire such a token, you need to send an HTTP GET request to the server using:

So a sample call would be:

The token is sent back as a string in the plain text response body.

Is used as a fallback if the nuxeo-platform-login-token add-on is not deployed on the Nuxeo server. In this case, at server binding time, both username and password are stored in the local database (server_bindings.remote_user and server_bindings.remote_password) and used for each HTTP request through a Basic Authentication header.

Synchronization is handled by a main thread that starts an infinite loop; see Synchronizer.loop() . The loop processes the sequence described below, putting Nuxeo Drive to sleep between each sequence execution for a maximum delay of 5 seconds if there is no more content to synchronize. This delay is configurable with the --delay option when using the ndrive command.

The communication between Nuxeo Drive and a Nuxeo server fully relies on Content Automation Concepts, except for:

Here is the list of Automation operations used by Nuxeo Drive:

Gets the top level FolderItem for the currently authenticated user.

Gets the children of the FolderItem with the given id for the currently authenticated user.

Gets the FileSystemItem with the given id for the currently authenticated user.

Check if the FileSystemItem with the given id exists for the currently authenticated user.

Deletes the FileSystemItem with the given id for the currently authenticated user.

Generates a conflicted name for a FileSystemItem given its name, the currently authenticated user's first name and last name. Doing so as an operation makes it possible to override this part without having to fork the client codebase.

As Nuxeo Drive relies on Automation REST calls, all the exchanged data is transfered in JSON. Here are some samples of the most common HTTP POST requests sent by Nuxeo Drive and their associated response. These are extracts from the Nuxeo Drive log file set to TRACE level.

Synchronization of a Locally Created File

Since version 1.3.0611, Nuxeo Drive is able to update itself with a newer or an older version (such a downgrade can be required if the Nuxeo server version is too old for the client version). This is very useful as it allows the user to keep the application up-to-date without having to manually install a new version.

Every hour (update-check-delay command line parameter) Nuxeo Drive checks the update site for a newer version compatible with the version of the Nuxeo server it is connected to. If such a version is available the systray icon changes colour and the "Update Nuxeo Drive" entry appears in the systray menu, allowing the user to trigger the update: download of the new version, installation, restart (uses subprocess.Popen(args)). At startup Nuxeo Drive checks if the current version stored in the database (client_version) is different from the code version, in which case it displays a dialog box to inform about the update to the newer version.

The user can configure Nuxeo Drive to automatically update itself in case of an available update through the General settings. This is persisted in the auto_update field.

Note that if Nuxeo Drive detects that the client version is not compatible with the server version it will stop the synchronization thread and display the "Upgrade/Downgrade required" entry in the systray menu.

At startup, when the Setting dialog is accepted and every hour, Nuxeo Drives refreshes the update information by:

The main framework used for handling the update is esky, which we've wrapped inside the AppUpdater class to handle the custom logic related to the client and server compatibility.

Basically esky is able to:

The update site structure is detailed in a dedicated page of the Nuxeo Drive Installation and Administration section which also explains how to set up a custom update site in case the one provided by Nuxeo wouldn't fit your needs.

The server-side part of Nuxeo Drive is distributed as a Marketplace package available from Nuxeo Connect (stable releases). You can also fetch the latest development version of the Marketplace package from our Jenkins continuous integration server (use at your own risk).

The server-side API mainly relies on the Java types described below.

Representation of a file or folder on a file system. It is used as an adapter of DocumentModel.

Representation of a file, i.e. a downloadable FileSystemItem. In the case of a DocumentModel backed implementation, the backing document holds a binary content. Typically a File, Note or Picture.

Representation of a folder. In the case of a DocumentModel backed implementation, the backing document is Folderish. Typically a Folder or a Workspace.

Provides an API to manage usual file system operations on a FileSystemItem given its id. Allows the following actions:

The server-side API mainly allows to:

The graph below illustrates the execution process corresponding to the Automation call samples seen earlier: remote polling and synchronization of a locally created file. 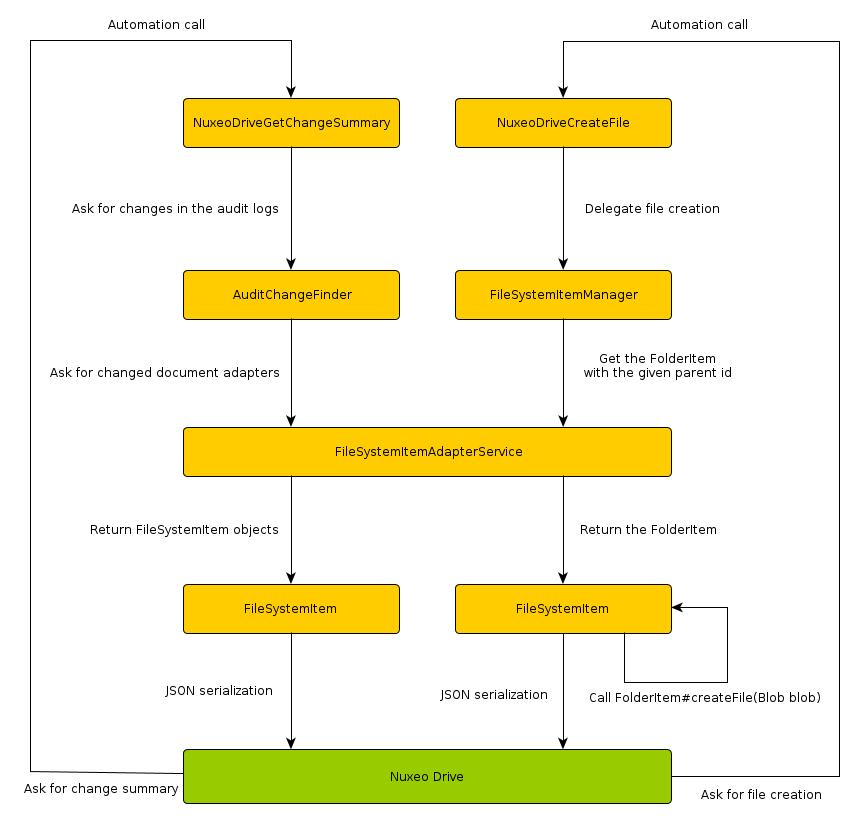 You can take a look at: