Welcome to the Release Notes for Nuxeo Drive 5.2.0

The Synchronization Mechanism is Now a Feature

A new feature selector has been added in the settings to enabled/disable synchronization feature. The feature is disabled by default and can be enabled through the GUI or the configuration file. The synchronization-enabled option is now deprecated and should not be used anymore as it will be removed in a future release. 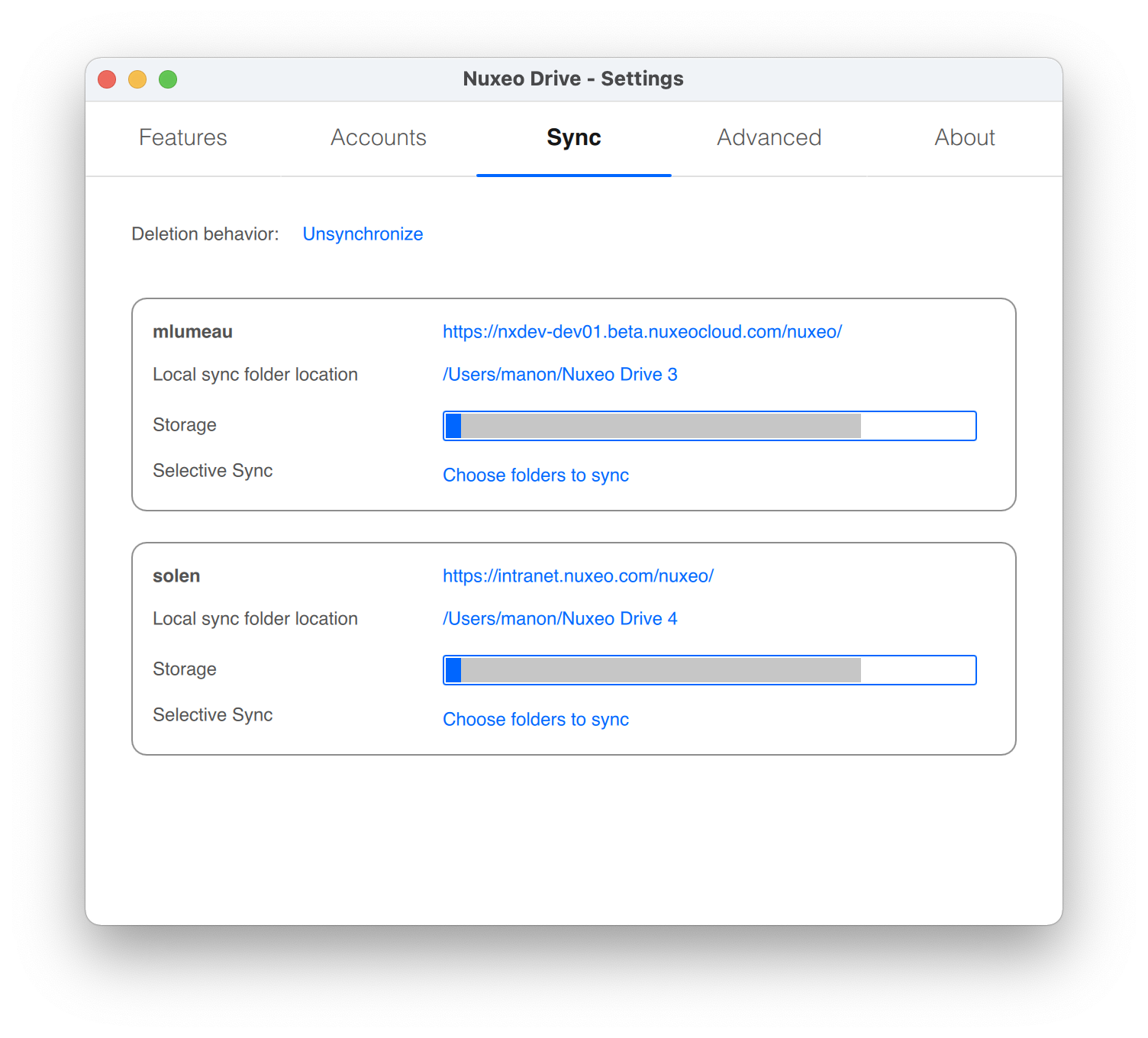 OAuth 2 finally landed in Nuxeo Drive! Support for OpenID Connect Discovery and ADFS were implemented too. A bunch of new options are now available to customize OAuth 2 connection: oauth2-authorization-endpoint, oauth2-client-id, oauth2-client-secret, oauth2-scope and oauth2-openid-configuration-url. Set relevant ones in the local configuration file before starting the application.

For now the legacy Nuxeo token authentication is still the default. To use OAuth 2, first add an OAuth 2 consumer, then when adding a new account in Nuxeo Drive, simply uncheck the Use legacy authentication checkbox.

Thanks to the recent watchdog upgrade, watching the local folder parent is no more necessary as the current watched will detect events targeting itself. Moreover, with the old behavior the application was watching huge trees for nothing. It was consuming resources and battery, and we would like to reduce such impact on the OS.

Reminder: to be able to use a UNC path for the synchronization folder, it is required to set nofscheck = true in the local configuration file.

The configuration file parser has been fixed to handle again path-like options.

The Accounts tab in the Settings screen has been improved and is now visually closer to the interface of Direct Transfer window and the new Synchronization tab. 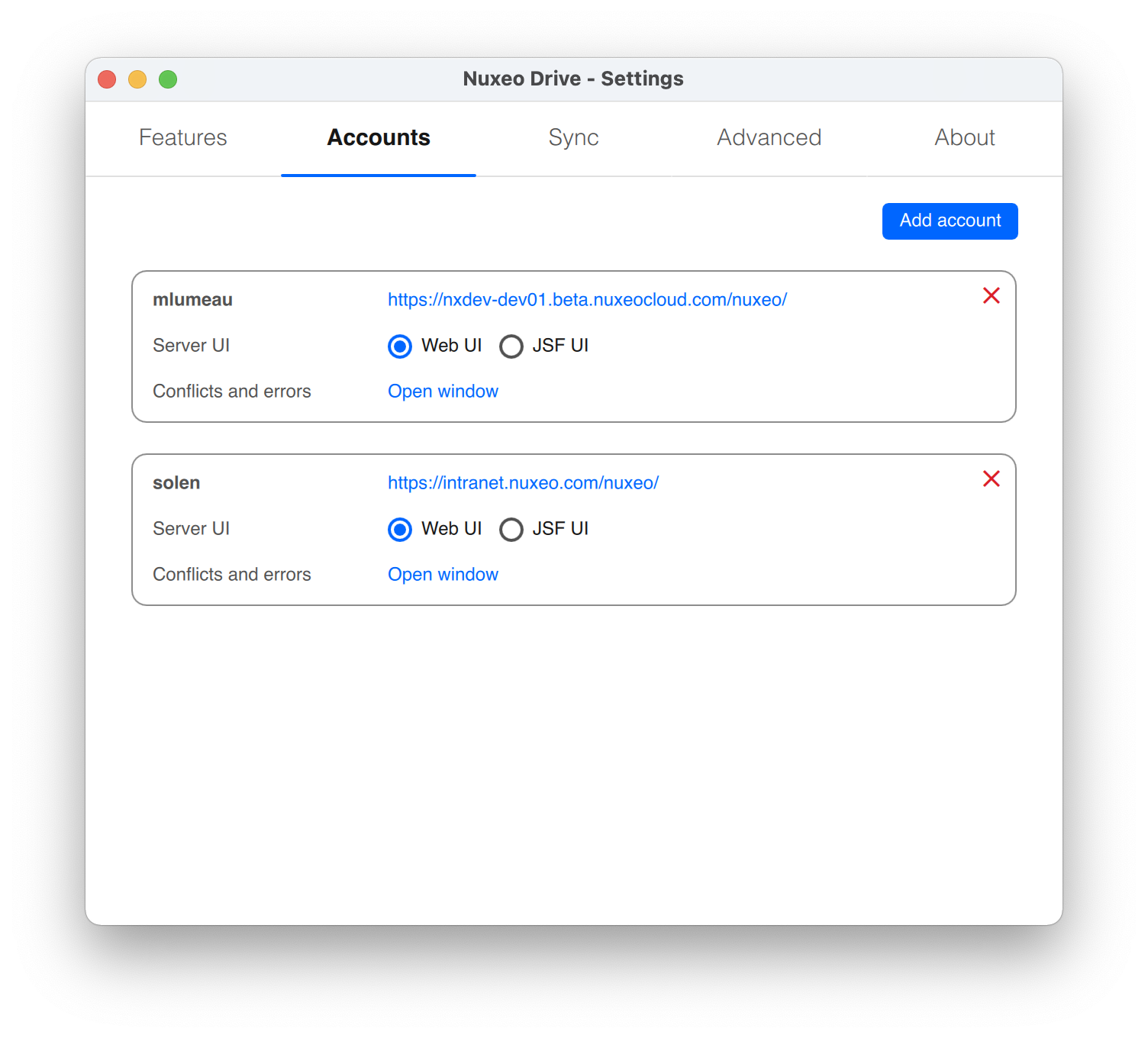 In order to follow the WYSIWYG principle, when manually changing the state of a feature, the state of all features will now be written into the local configuration file. The old behavior was saving only the impacted feature.

When uploading a large file through S3, given the server configuration in-place, it may happen that the batchId on the Nuxeo side is deleted from the transient store while the binary is still being sent to S3.

To improve the situation a sysadmin could set higher values for those properties:

On the Nuxeo Drive side, the batchId will now be pinged on a regular basis (every 55 minutes) to update its TTL and prevent its deletion from the transient store.

The Direct Edit experience has been made more robust by better handling HTTP 404 (Not Found), 502 (Bad Gateway), 503 (Service Unavailable) and 504 (Gateway Timeout) errors.

Allowing transfers into the Personal Space folder can be problematic. So we added a new option to hide it from the Direct Transfer window: dt-hide-personal-space.

The option can be set globally from the server configuration, and it will be taken into account almost instantly by all clients without requiring a restart of the application.

When choosing a folder or a file in the Direct Transfer window, symbolic links are now ignored to prevent dangerous or unhandled behaviors.

The synchronization engine has been made more robust against HTTP 405 (Method Not Allowed), 408 (Request Timeout) and 504 (Gateway Timeout) errors.