Company C has decided to be more rigorous on proposals sent by the sales team. A workflow has to be set up so that each proposal is reviewed by the head of operations, this one being able to decide of an additional juridical control.

The following operations have to be done in your Nuxeo Platform before following this tutorial:

Workflows can be launched through a drop down list on the summary screen of every document. Into the “Activation” tab, you can decide for which type of document the workflow you do will be usable, for which group of users, etc.

A workflow must start with a node for which the "start node" property is checked and have at least one end node with the "end node" property checked. To make it simpler, Studio provides a node template library (on the left), from which a Start node and an Stop node are available.

To start the workflow graph:

This node will create a task for the head of operations, named "Jack". Jack will have to accept or reject the proposal submitted by the salesman, or decide that it requires a juridical advice.

Drag the Accept/Reject node template from the node template library and drop it on the graph. It will already have some of the needed transitions and buttons pre-configured: “Validate” and “Reject”. You actually need another transition (“Need juridical advice”), which you will add manually in a future step. 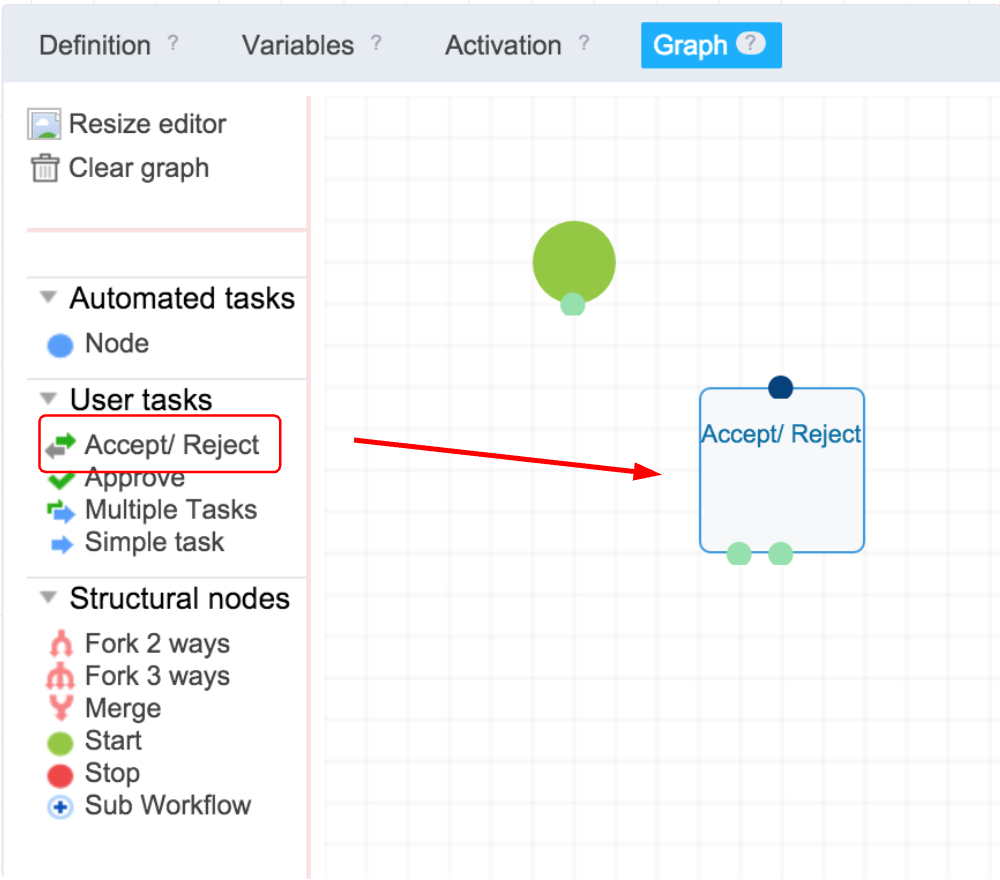 This variable will be named “hoo_comment”.

To add the workflow variables:

The form lets the user edit some of the workflow's variables (either at workflow level or node level), and the buttons help the engine to know which transition to play after the node, depending on what the user clicked on.

Setting up the Tasks Buttons

The buttons that are shown on the form are configured on the Resolution Actions tab. Two are already available because of the template node you chose. You need to add a third one when the document requires juridical expertise.

Each button is automatically associated to a transition to define what should be done when the user clicks on the button. Transitions automatically get a condition, which is a system node variable called “button”. This variable is systematically updated with the id of the button used to process the task. It is useful to configure the behavior of the transitions.

Now that we have our “Technical validation” node set up, we need to create the nodes used for its possible transitions. First comes the “Juridical advice” node. As most operations have been described before, we will only comment this node’s specificities.

Drag the “Approve” node from the node template library and drop it on the graph.

You will now take care of the “Proposal update” node, which will be used in case Jack refuses the proposal.

The “Approve” node will once again be the most appropriate. Pick it up and drop it on the graph.

This is almost finished. The last node needed is the end node. This node sets a possible ending to the workflow. In this situation only one end node will be used, but remember that you may use several end nodes if needed.

Pickup the “Stop” node from the node template library and drop it on the graph.

A document being accepted by the head of operations or the juridical services has to see its metadata updated. This is something we can achieve through an automation chain. Let's see how we will manage this situation.