This page covers the principles and components that can be included in a production-ready Nuxeo cluster architecture.

In order to scale out and provide high availability (HA), Nuxeo provides a simple clustering solution. When cluster mode is enabled, you can have several Nuxeo server nodes connected to the same components, and you can then simply add more Nuxeo server nodes if you need to serve more requests.

This diagram represents the logical architecture for a Nuxeo cluster. It contains the following components: 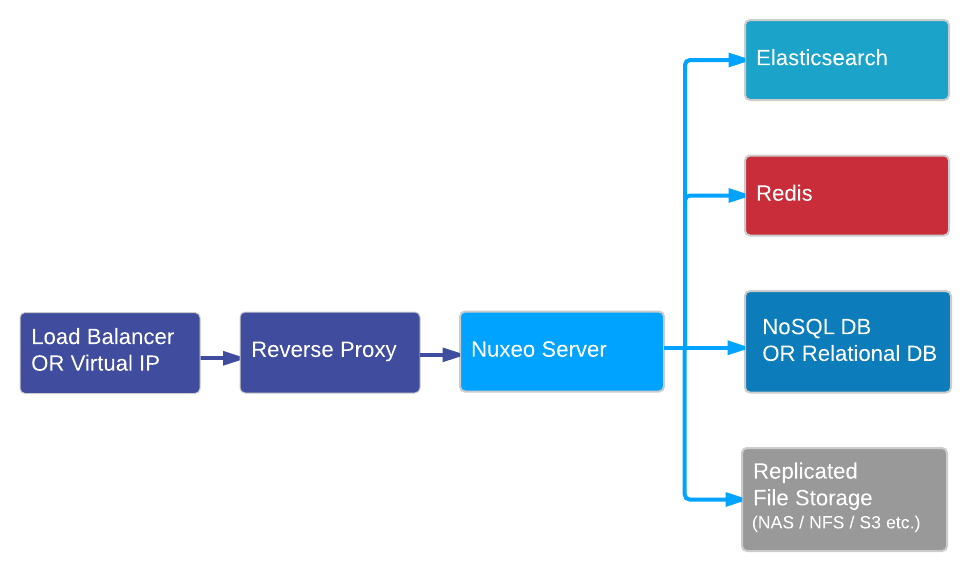 We will explain the role of each component below.

Load balancers are used to allocate the load between Nuxeo nodes. They can be configured to redirect particular queries to specific nodes. This can be interesting in the following use cases:

Load balancing can be managed by software or hardware, but in all cases (even if you use Nuxeo as a bare server without a UI) the only constraint we ask for is to have a load balancer configured with sticky sessions.

A reverse proxy is used to avoid users from accessing the Nuxeo server directly. One simple rule you have to follow is that on a production setup, your Nuxeo server should never be exposed directly. Setting up a reverse proxy brings many benefits to performance and security aspects: 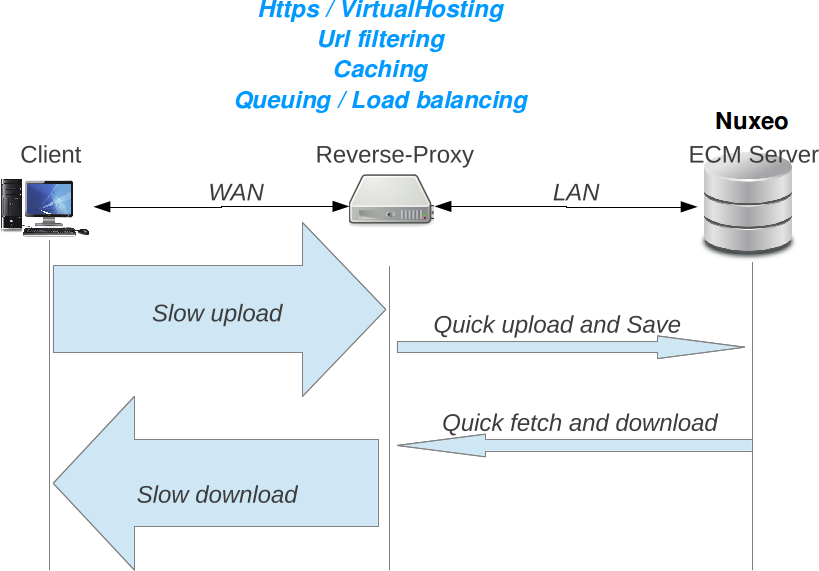 Nuxeo Server can be installed in a variety of ways, including a docker container, a VM image, a debian repository, or a simple cross-platform zip file. It is distributed in a prepackaged Tomcat server that includes Nuxeo, a transaction manager (JTA) and a pool manager (JCA). The WAR file is generated dynamically upon each Nuxeo server restart, allowing easy configuration changes and customization deployment. Further information on this subject can be found in the Understanding Bundles Deployment documentation.

Nuxeo Server can be deployed anywhere, including as an embedded tool. Having a lightweight embedded Nuxeo server is a solution commonly used for unit testing or offline access. For the latter, the Nuxeo server would be embedded client side (for example, on a tablet) to allow offline access, and would synchronize with a central Nuxeo server when going back online.

For a high availability cluster, a minimum of two Nuxeo server nodes is required.

The database is a core component for your Nuxeo cluster infrastructure, since it will store the document hierarchy, all document properties, and will be used as well for various queries. Nuxeo supports many databases, both NoSQL and relational ones. Among them, MongoDB and PostgreSQL currently provide the best overall performances for Nuxeo usage.

Each database has its own solutions for high availability, therefore we may not recommend a specific option here. You may however refer to our database configuration documentation for further details.

Elasticsearch is used to relieve the database from the costliest operations:

Elasticsearch remains an optional component and can be deactivated if needed. But except for some specific use cases where installation size and setup steps highly matter (for example, when embedding a Nuxeo server), it is highly recommended to take advantage of it. Refer to the Elasticsearch setup documentation for more information.

Number of Machines for Elasticsearch / Redis cluster
Note that you always need to have an odd number of machines for Redis and Elasticsearch (3, 5, 7,etc.). It is required in order to safely handle failover when a network partitioning error occurs.

Imagine that your cluster gets cut in half: 2 nodes on side A cannot communicate anymore with the third node on side B. In this situation, if the master node is the one isolated on side B, failover can be achieved properly because a majority (the 2 nodes on side A) can elect a new master node between them and keep service available.

If you had 4 nodes in the same situation, service wouldn't be available anymore because a majority could not be obtained when voting. This is known as the split-brain problem. This also means that the minimum number of nodes to obtain high availability is 3.

When running in cluster mode, the Nuxeo nodes needs to communicate so the following services work in a distributed way:

Before Nuxeo 9.10, Redis was the only option for all the available distributed services:

Since Nuxeo 9.10 and the introduction of Nuxeo Stream, there are more choice and it is even possible to not use Redis when using Kafka and MongoDB:

Since Nuxeo 10.10, there are KeyValue store implementations for SQL backend. We strongly recommend the usage of Kafka to have a highly reliable Bulk Service.

As seen above, Redis can be used for the WorkManager, KeyValue Store and PubSub service.

When a Redis instance or cluster is set up, you can safely stop your Nuxeo server nodes anytime without being worried about losing these jobs in the process.

Keep in mind that Redis is always limited by its available memory which can be a problem on a mass operation.

For high availability, a Redis cluster with a minimum of three nodes is required (for the same reasons as Elasticsearch).

Redis Sentinel is the open-source option to provide automatic Redis node failover. Nuxeo server's API has been adapted to be used with Redis Sentinel, and some of our customers happily use it in production. Before choosing it though, you need to know that RedisLabs (creators of Redis) does not officially support it, which means that in case of a problem we will not be able to provide support either.

Redis Enterprise is our recommendation for a high availability Redis cluster, as it gets support from RedisLabs. You may visit the RedisLabs website for more information about the product.

Since Nuxeo 10.10 Kafka is recommended in cluster mode so the Bulk Service can be distributed and handle failover between Nuxeo nodes.

When used as WorkManager implementation you can safely stop a Nuxeo node anytime without being worried of losing any processing.

When the KeyValue store relies on the repository's backend, you don't need a Redis cluster anymore.

Kafka requires few resources and it is limited only by the available disk space.

For high availability Kafka needs to be deployed in cluster.

Nuxeo stores binaries attached to the documents on a file system by default. That can be a shared file system, a NAS, an Amazon S3 bucket or its Microsoft Azure equivalent, etc. More options are available depending on your target deployment. This is described in the Storage Alternatives section below.

Nuxeo is pluggable so that it can be adapted to different deployment environments and use cases. 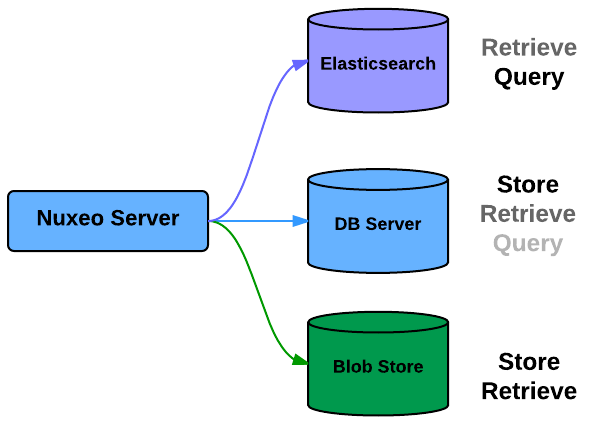 Since 6.0, the default configuration uses Elasticsearch.

In the same logic, you can choose: