Some databases may use a database-native UUID instead of a string-based UUID if Nuxeo is configured to do so, or even an automatically-generated small integer instead (see nuxeo.vcs.idtype in Configuration Parameters Index (nuxeo.conf) or <idType> in Repository Configuration).

All the fragments making up a given node use the node id in their id column.

There are two kinds of nodes: filed ones (those who have a location in the containment hierarchy), and unfiled ones (version frozen nodes, and some other documents like tags).

Each node has a row in the main hierarchy table defining its containment information if it is filed, or just holding its name if it is unfiled. The same tables holds ordering information for ordered children.

For performance reasons (denormalization) this table has actually more columns; they are detailed below.

The node types are accessed from the main hierarchy table.

When retrieving a node by its id the primarytype and mixintypes are consulted. According to their values a set of applicable fragments is deduced, to give a full information of all the fragment tables that apply to this node.

The isproperty column holds a boolean that distinguishes normal children from complex properties,

The mixintypes stores a set of mixins (called Facets in the high-level documentation). For databases that support arrays (PostgreSQL), they are stored as an array; for other databases, they are stored as a |-separated string with initial and final | terminators (in order to allow efficient LIKE-based matching) — for the example row 5678 above the mixins would be stored as the string |Facet1|Facet2|.

A "myschema" fragment (corresponding to a Nuxeo schema with the same name) will have the following table:

A consequence is that to retrieve the content of a node, a SELECT will have to be done in each of the tables corresponding to the node type and all its inherited node types. However lazy retrieval of a node's content means that in many cases only a subset of these tables will be needed.

A multi-valued property is represented as data from a separate array table holding the values and their order. For instance, the property "my:subjects" of the schema "myschema" with prefix "my" will be stored in the following table:

The blob abstraction in Nuxeo is treated by the storage as any other schema, "content", except that one of the columns, data, hold a blob key. This blob key corresponds indirectly to the content of the file. Because the content schema is used as a complex property, there are two entries in the hierarchy table for each document.

The filename of a blob is primarily stored in the name column of the content table. For historical reasons, the filename is also stored in a separate file table.

The default blob provider implementation stores binaries on the server filesystem according to the value stored in the data column, which is computed as a cryptographic hash of the binary in order to check for uniqueness and share identical binaries (hashes are actually longer than shown here). On the server filesystem, a binary is stored in a set of multi-level directories based on the has, to spread storage. For instance the binary with the hash c38fcf32f16e4fea074c21abb4c5fd07 will be stored in a file with path data/c3/8f/c38fcf32f16e4fea074c21abb4c5fd07 under the binaries root.

Other blob providers use the data column differently to refer to their blobs, for instance the FilesystemBlobProvider uses a relative path to a file in a special area of the filesystem. The GoogleDriveBlobProvider uses the concatenation of a user email and a Google Drive file id with an optional revision number.

In the case of tags, the relation document has type "Tagging", its source is the document being tagged, and its target has type "Tag" (a type with a schema "tag" that contains a field "label" which is the actual tag).

You may want to read background information about Nuxeo versioning first.

Version nodes don't have a parent (they are unfiled), but have more meta-information (versionable id, various information) than live nodes. Live nodes hold information about the version they are derived from (base version id).

Proxies by themselves don't have additional content-related schema, but still have security, locking, etc. These facts are part of the node type inheritance, but the proxy node type table by itself is a normal node type table.

When configured (this is the default) to be stored in the VCS database, the locks are held in a table containing the lock owner and a timestamp of the lock creation time.

When a document is unlocked, the corresponding line is deleted.

Another important feature of the locks table is that the id column is not a foreign key to hierarchy.id. This is necessary in order to isolate the locking subsystem from writing transactions on the main data, to have atomic locks. It is also necessary to be able to lock a document before it is first created in the database.

The Nuxeo security model is based on the following:

This table is slightly denormalized (names with identical values follow each other by pos ordering), but this is to minimize the number of JOINs to get all ACLs for a document. Also one cannot have a named ACL with an empty list of ACEs in it, but this is not a problem given the semantics of ACLs.

The lifecycle information (life ycle policy and lifecycle state) is stored in a dedicated table.

The full-text indexing table holds information about the fulltext extracted from a document, and is used when fulltext queries are made. The structure of this table depends a lot on the underlying SQL database used, because each database has its own way of doing fulltext indexing. The basic structure is as follow:

Some databases can directly index several columns at a time, in which case the fulltext column doesn't exist, there is no trigger, and the two simpletext and binarytext columns are indexed together.

The above three columns show the data stored and indexed for the default fulltext index, but Nuxeo allows any number of additional indexes to be used (indexing a separate set of properties). In this case additional columns are present, suffixed by the index name; for instance for index "main" you would find the additional columns:

This table hold the root id for each repository. Usually Nuxeo has only one repository per database, which is named "default".

Note that the id column is a FOREIGN KEY to hierarchy.id.

For databases that support it, some path optimizations allow faster computation of the NXQL STARTSWITH operator and ecm:ancestorId property.

When path optimizations are enabled (this is the default on supported databases), an addition table stores the descendants of every document. This table is updated through triggers when documents are added, deleted or moved.

Another more efficient optimization is used instead for PostgreSQL (see NXP-5390). For this optimization, an ancestors table stores all the ancestors as an array in a single cell. This table is also updated through triggers:

The ancestors column contains the array of ordered ancestors of each document (not complex properties), with the root at the beginning of the array and the direct parent at the end.

For databases that support it, ACL optimizations allow faster security checks than the NX_ACCESS_ALLOWED stored procedure used in standard.

The hierarchy_read_acl table stores information about the complete ACL that applies to a document.

The acl_id is the unique identifier for the complete read ACL (merged with ancestors) for this document. It references the id column in the read_acls table, but not using a FOREIGN KEY for speed reasons.

The read_acls table stores all the possibles ACLs and their unique id.

The unique ACL id is computed through a hash to simplify unicity checks.

When a security check has to be done, the user and all its groups are passed to a stored procedure (usually NX_GET_READ_ACLS_FOR), and the resulting values are JOINed to the hierarchy_read_acl table to limit document ids to match.

The NX_GET_READ_ACLS_FOR stored procedure has to find all ACLs for a given user, and the results of that can be cached in the read_acls_cache table. This cache is invalidated as soon as security on a document changes.

An additional table, aclr_modified, is used to temporarily log document ids where ACLs are modified.

This table is filled while a set of ACL modifications are in progress, and when the Nuxeo session is saved the stored procedure NX_UPDATE_READ_ACLS is called to recompute what's needed according to hierarchy_modified_acl, which is then emptied.

To be more efficient in read/write concurrency, when a new ACL is added the list of read ACL per user is updated instead of being flushed. This is done using database triggers. Note that some tables have been renamed and prefixed by aclr_ (for ACL Read). Following is a big picture of the trigger processing: 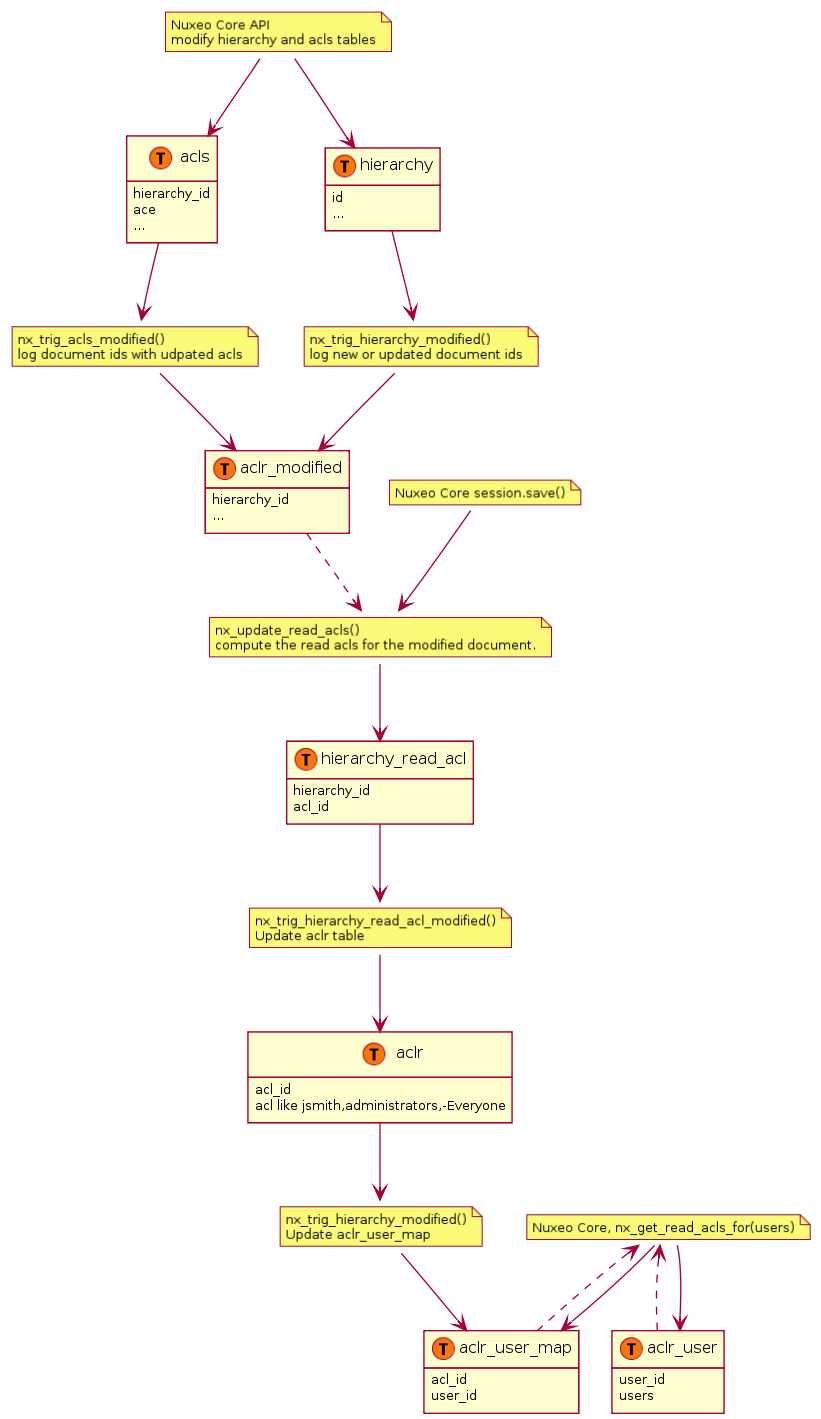