This page describes how your Nuxeo cluster can scale depending on your needs.

Nuxeo Server by itself allows you to scale out processing: you can add new nodes as the number of requests increase. 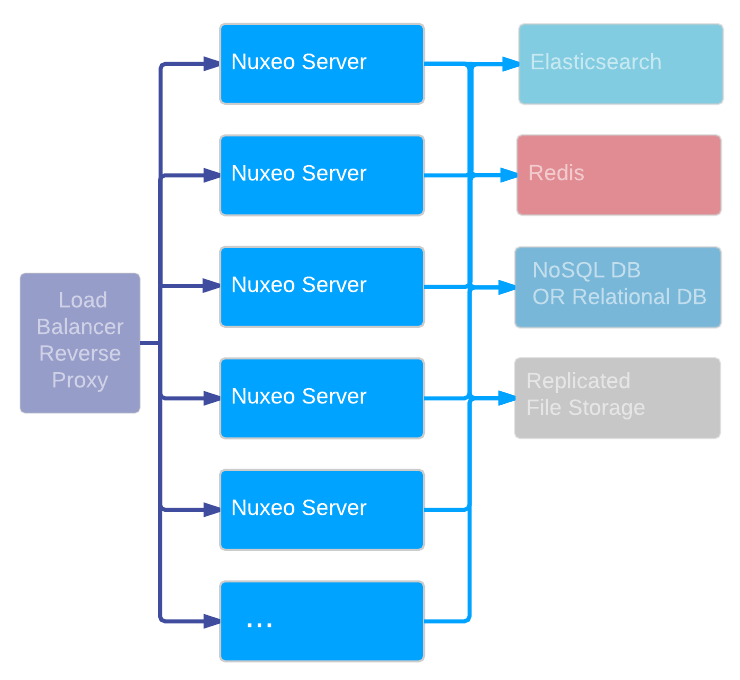 Applications requiring heavy processing like picture or video conversions can take benefit from having some Nuxeo Server nodes dedicated to these asynchronous tasks. Having such a demarcation between nodes is a good way to be sure that async processing won't slow down interactive processing.

The async tasks can be managed in a distributed way using the WorkManager with Redis or Kafka.

The WorkManager defines pools of workers, the size of a pool defines the maximum number of threads that can run concurrently on this node.

When using Kafka, each worker thread is a consumer of a Kafka topic containing works for the pool.

The maximum concurrency for Kafka consumers is limited by the number of partitions in the topic.

By default, we over-provision the number of partition with a factor 3, so there are 12 partitions when defining a work pool of 4.

This is very handy to limit the processing throughput per pool at the cluster level, adding nodes will scale up to an expected limit but adding more nodes will not make the cluster collapse.

When correctly configured, most databases can handle a heavy load of store and retrieve operations: the first bottleneck is usually complex queries.

So, a first solution to scale out the storage layer is to split the work between:

At the Nuxeo level, directing a query to the repository database or to Elasticsearch is just a matter of configuration: code and query remain the same. You can refer to the moving load from database to Elasticsearch page for details.

This approach allows you to leverage Elasticsearch capabilities to its fullest:

As seen before, it is easy to scale out processing on Nuxeo Platform, you only need to add more Nuxeo Server nodes. However, at some point, you may also need to be able to scale out the storage layer: we provide several options for that.

Nuxeo natively deduplicates files attached to your documents, which makes the necessary disk space to operate your applications lower. Still, there are a few details you might wish to know.

When storing files in the cloud using for instance the native Amazon S3 connector we provide, you don't need to worry about how files will be distributed on the filesystem.

When storing files on premise, Nuxeo arranges to maximize performances by distributing files in subfolders. A md5 checksum of the file is calculated, and the file is stored in a two-level folder structure named after the first characters of the checksum.

For example, a file having the following checksum: 38c8a503c45169a0668c4ef0c2dc12ec would be stored in a 38/c8 folder structure. The number of characters used for the folder naming is easily configurable, although it's unlikely you will need more than the two characters used by default:

Even older filesystems have no performance problem until 10 000 files per folder, which gives you a lot of latitude. Past a certain point, you may wish however to lower costs by distributing files between different hardware solutions. This can easily be achieved by adding repositories in your application, and we describe this solution in the scaling database storage below.

One of the key advantages of NoSQL databases, like MongoDB, is that they allow to scale out by simply adding nodes to the cluster and natively offer sharding on the nodes.

The repositories are like mount points: The default configuration is to have only one repository named "Default Repository" and mounted under /default/. But you can add new repositories as needed. These new repositories will appear inside the application as several content roots. This typically means that when accessing a document, you have to know what the host repository is.

Typical use cases for data partitioning include:

Selecting your storage type according to the needs

This data partitioning is visible to end users, but thanks to Elasticsearch we can provide a unified index. It means searches can be executed in all repositories seamlessly, and any document query or listing can take advantage of this unified index too when necessary. 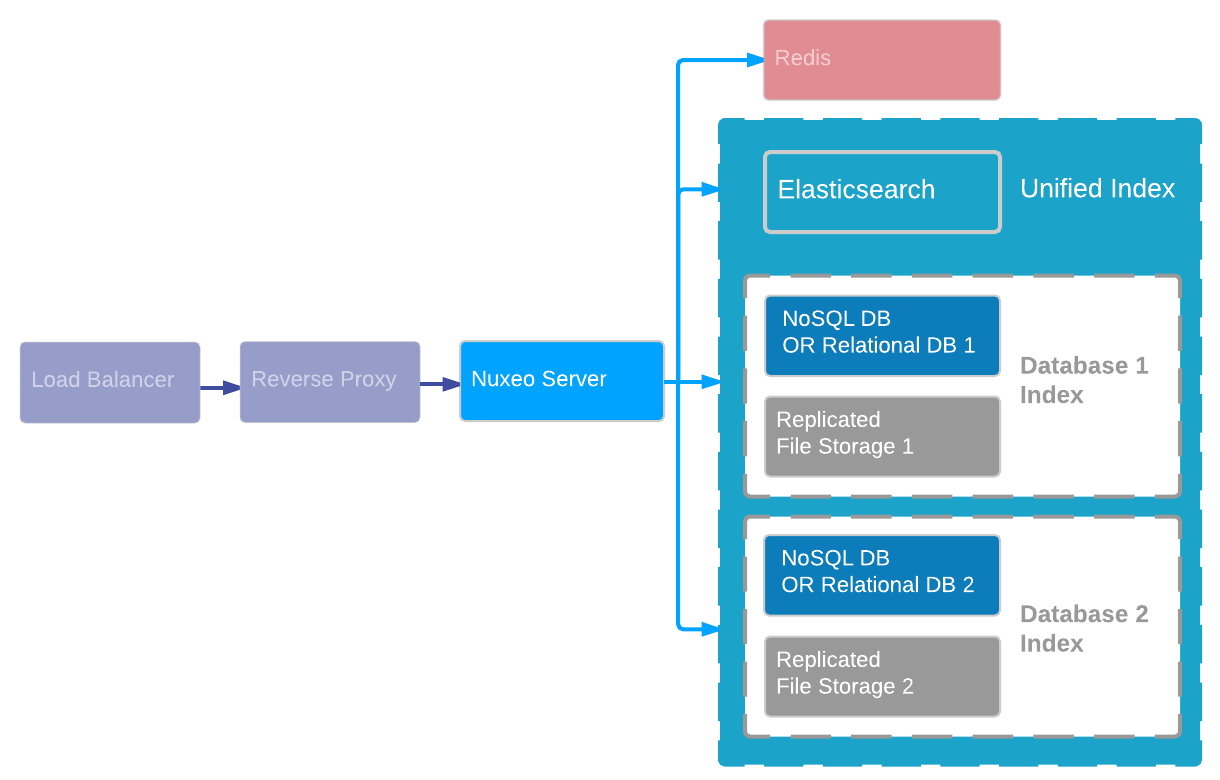 This type of sharding has been tested during a performance benchmark using 10 PostgreSQL databases to reach a total of 1 billion documents.